The history of our stud

Breeders in Hungary made efforts to create dun studs in the 1970s. (This was a favoured colour for horses in Hungary, so they thought that it was a “characteristically Hungarian colour” for horses.) To achieve this goal, some Hungarian breeders imported 3 stallions from an Akhal Teke stud in Turkmenistan.

Unfortunately two of these stallions failed in this capacity. The third one named Musztafa was not very fertile, either, however he produced a stallion named Musztafa 53, who, apart from his outstanding jumping capabilities and pre-potency, became an officially certified state-owned stallion.
We got acquainted with Musztafa when he was over 20 years of age. The stallion was in bad health, so he was not valued as a stallion anymore on the farm where he lived. At that time we had been searching for an Akhal Teke stallion, so with the help of professionals and friends, we bought Musztafa at the beginning of the 1990s, and he served on our farm for several seasons. The excellent genetic stock of this stallion provided a firm breeding platform for the development of our Akhal Teke stud.

Some years later he died on our farm, and we buried him in a pasture…

-We bought his colt, named Mustafa 53, also with the help of professionals and friends in 1996. We tried to strengthen the genetic stock of the founding father of our stud with that of his colt. He served on our farm until 2001, when he died. He is also buried in our pasture.

Karador, another stallion, who served on our farm for 10 years, had a great impact on our stud. Karador was imported to Hungary from Askhabad, Turkmenistan. Karador’s sire, Karader was a successful race-horse, who was regarded as a national treasure, part of the national coat of arms in Turkmenistan, and whose picture could be seen on a Turkmenistani coin. Karader’s colt, Karador was taken to Tbilisi, the capital of Georgia, where he became a race-horse. Do to various wars that were waged between the former Soviet republics the very existence of local studs was in danger. The director of a city hospital tried to save the horses by trying to get them transported to Europe…Thanks to the help of József Vörös, this doctor’s Hungarian partner, 11 Akhal Teke horses were imported to Hungary, most of which were bought by people from Western Europe. Karador was not sold due to the very high auction price set for him, so a fortunate moment came when, partnered with József Vörös and Sarolta Sütz our family bought this stallion, who was transported to our farm at Ópusztaszer in 1997.
A pure-bred stallion named Aydin also served on our farm. József Nyéki, president of the Akhal Association bought him in Russia. Aydin was transported to our farm in 2002, and served here for one season. We also used him occasionally for covering some of our mares, so he has several specimens of offspring in our stud; they represent a few generations.

A brood stallion named Seiran, who was made available for us by breeders in the Czech Republic, served on our farm for one season from 2004 to 2005. Stardust, a young colt begat by Seiran, may be a stallion in our stud in the future.

Our stallions at present: Stardust and Kujon. We have one more stallion Jáspis: he doesn’t cover in 2021. He is for sale! You can see them under the Stallions menu…

A few words about the stud:

The stud has developed from subsequent and more and more populous mare families. The composition and quality of subsequent generations are always determined by the available breeding stock and the necessity to pursue equestrian activities for profit generation (equestrian camps, tours) that influence the dimensions of breeding.

As regards stallions, we were always in a very favourable situation. We started our breeding activities with excellent genetic foundations. Our first stallion, Musztafa, proved to be a stallion with outstanding pre-potency. This was continued by Karador, who strengthened the fenotypical features of the stud. All in all, these two stallions laid the foundation for the general character of our stud.

As regards mares, we had to make use of the available individuals animals.

We at all times need individual horses with a varying degree of purity (50-70% Akhal) because of or equestrian programmes such as riding instructions and equestrian tours.

In summary, at present we pursue two basic directions in our breeding endeavours: we make efforts to develop a smaller number of individual animals with a higher degree of Akhal purity as well as pure-bred Akhal horses, while most individuals in our stud, as a result of targeted mating for practical purposes, will perform various service-related tasks. 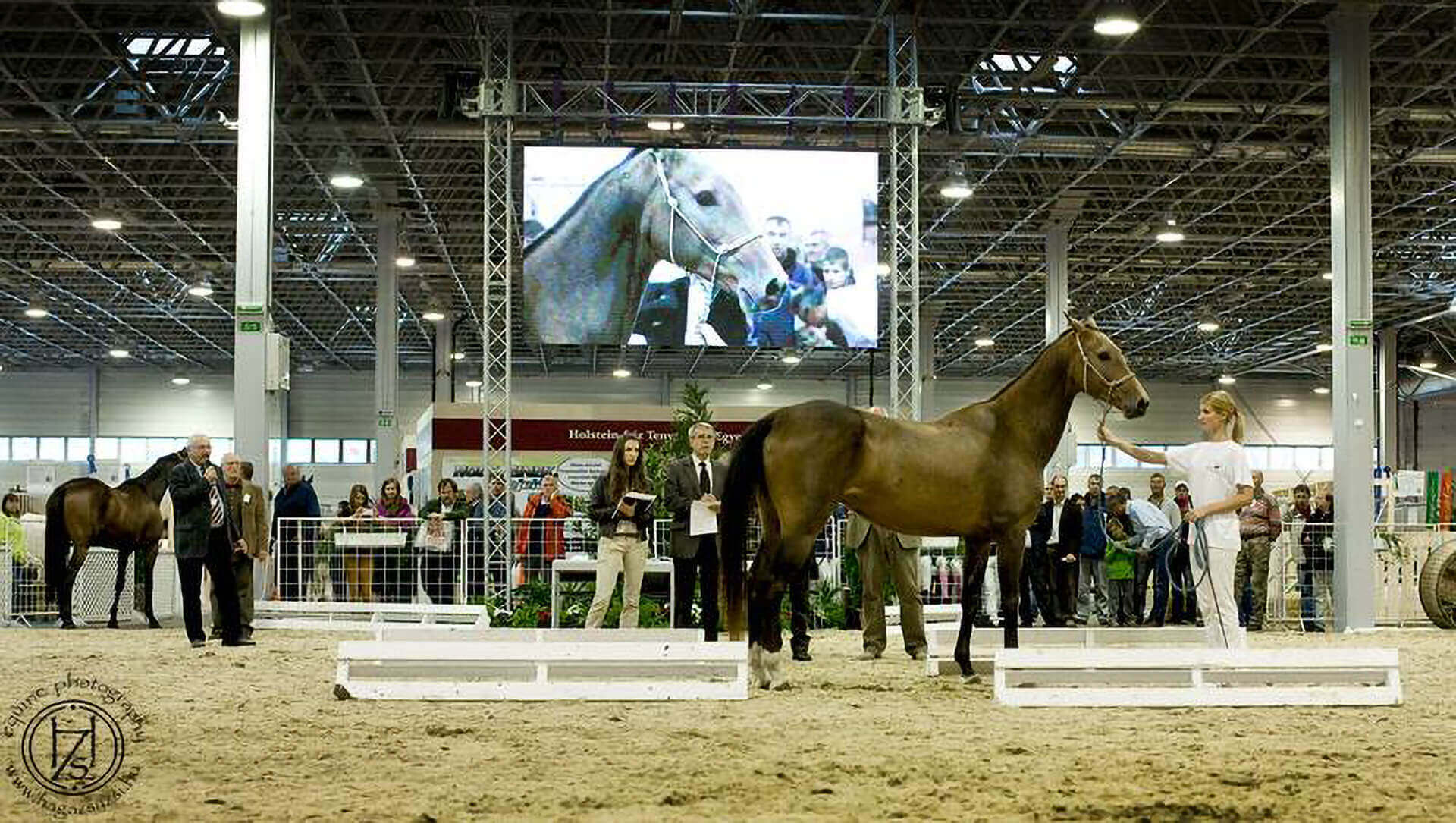 The way the horses are reared determines their life from birth throughout their life-span therefore mention must be made of our rearing methodology.

Our horses live in a stud, which means that they graze in a large group freely in our pastures. This is not entirely true since the sires and colts are separated from the rest of the stud. Various generations of fillies that belong to different mares live together with old mares. Naturally, we, their farmers are with them from their birth.

At this point a short bit of additional explanation is needed about our rearing method. When a newly born foal first sees its mother, it also sees us; when a suckling foal learns the routine order beside its mother, it also learns from us. An adolescent foal bragging about its strength must learn to respect superior beings due to rank and age, be they horses, or humans.

We firmly believe that this provides an ideal context for the development of a healthy psyche for our horses: as far as we can, we provide a genuine habitat for our horses however we are also part of this.